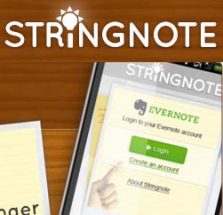 Building on the significant growth in the Android handset device market, Kanda created Stringnote Instant Reminder for Evernote to simplify the process of quickly capturing notes, reminders, or photographs. The app is also fully integrated with Evernote so that users can automatically and remotely post those notes, reminders, and digital photographs to their Evernote accounts.

“We created Stringnote because great ideas can have lousy timing. Whether you are driving, watching TV, or participating in a conference call, your brain is multi-tasking – processing your thoughts and ideas in its own order. Stringnote helps you capture those ideas and save them with other ideas for you to review when you have some time,” said Alex Karpovsky, CEO of Kanda Software, commenting on the release of Stringnote Instant Reminder for Evernote. Mr. Karpovsky added, “Evernote has over 10 million users at this point, and many of them rely upon their mobile devices to take pictures, create notes, and reminders. We feel that Stringnote integrates the power of Android devices with the ubiquity of Evernote in a thoroughly useful manner.”

Stringnote Instant Reminder for Evernote is a lightweight application and runs on Google’s Android operating system. In order to use Stringnote, users simply double-click the power button on their Android device. At that point, users can take a picture or record up to 15 seconds of spoken voice and add it to the note. Stringnote Instant Reminder for Evernote automatically records the time, a short description, and your current location when available, and sends it to your Evernote notebook. Finally, users can go to their Evernote account and edit, file, and organize their notes.

Based out of Massachusetts, Kanda Software is a solid and flexible partner who has successfully collaborated with clients since 1993 on hundreds of engagements. Kanda has developed point solutions to fully outsourced software product development and everything in between. Kanda is your partner for a world where software development is constantly in flux and continually being reinvented (C) Kanda Software 2012.