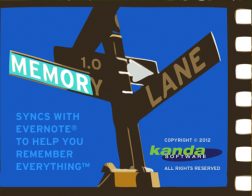 Kanda Software, a leading software development firm, has announced that its Memory Lane(TM) desktop application for the Apple Mac platform is now freely available from the Mac App Store.

Memory Lane reads user-selected notebooks and presents its contents as a scrolling slide-show as wallpaper, screen saver or in a resizable window in an interactive mode. Memory Lane pulls text notes, photos, web pages, to-dos and shopping lists, and PDFs, and represents them in artful snippets back to the user. Memory Lane is automatically updated whenever the user’s Evernote account is updated so the contents are always up-to-date.

“Evernote is an incredibly powerful tool for many users around the world and we are very excited to help enhance its capabilities,” said Alex Karpovsky, CEO of Kanda Software. He continued, “Memory Lane enhances the mission of Evernote – which is to remember everything that is important to you – and make it more fun. Memory Lane adds a degree of fun and beauty to your personal notes and memories. Imagine suddenly re-reading a piece of poetry you once put into Evernote but forgot that you ever did. This helps awaken memories and reinforce your recollection of important things.”

Memory Lane can enhance the Evernote experience on Mac-based computers in multiple ways.

Memory Lane works with Mac OSX Lion. To download Memory Lane, please visit the App Store by clicking on the icon located in your Mac system dock. The app can be downloaded from the Mac App Store.

Memory Lane is part of Kanda Software’s growing portfolio of showcase apps it has released to the various marketplaces. Other apps include: